After single-handedly redefining „warped“ as the mind and mouth behind the Bronx-based Ultramagnetic MC’s, „Kool“ Keith Thornton — aka Rhythm X, aka Dr. Octagon, aka Dr. Dooom, aka Mr. Gerbik — headed for the outer reaches of the stratosphere with a variety of solo projects. A o­netime psychiatric patient at Bellevue, Keith’s lyrical thematics remained as free-flowing here as they ever were with the N.Y. trio, connecting up complex meters with fierce, layers-deep metaphors and veiled criticisms of those who „water down the sound that comes from the ghetto.“ His own debut single, „Earth People“ by Dr. Octagon, was quietly released in late 1995 o­n the San Francisco-based Bulk Recordings, and the track spread like wildfire through the hip-hop underground, as did the subsequent self-titled full-length released the following year. Featuring internationally renowned DJ Q-Bert (of Invisibl Skratch Piklz) o­n turntables, as well as the Automator and DJ Shadow behind the boards, Dr. Octagon’s left-field fusion of sound collage, fierce turntable work, and bizarre, impressionistic rapping found audiences in the most unlikely of places, from hardcore hip-hop heads to jaded rock critics. Although a somewhat sophomoric preoccupation with body parts and scatology tended to dominate the album, Keith’s complex weave of associations and shifting references is quite often amazing in its intricacy. The record found its way to the U.K.-based abstract hip-hop imprint Mo’Wax (for whom Shadow also records) in mid-1996, and was licensed by the label for European release (Mo’Wax also released a DJ-friendly instrumental version of the album titled, appropriately, The Instrumentalyst [Octagon Beats]).

The widespread popularity of the album eventually landed Keith at Geffen splinter DreamWorks in 1997; the label gave Dr. Octagon (retitled Dr. Octagonecologyst) its third release mid-year, adding a number of bonus cuts. In early 1999, however, Keith’s alter ego Dr. Dooom unfortunately „killed off“ Dr. Octagon o­n the opening track of First Come, First Served (released o­n Thornton’s own Funky Ass label). Kool Keith signed to Ruffhouse/MCA for his second album under that alias, 1999’s Black Elvis/Lost in Space. Records released as Kool Keith followed in 2000 (Matthew) and 2001 (Spankmaster), while the 2002 collaboration Gene appeared as KHM (Kool Keith plus H-Bomb and Marc Live). His next project was a four-rapper group named Thee Undatakerz with Keith taking o­n a new persona, Reverand Tom. Kool Keith Presents Thee Undatakerz hit the streets in May 2004. Keeping busy, Keith released Diesel Truckers in August of the same year with old friend/producer KutMasta Kurt. As if 2004 weren’t filled with enough Kool Keith releases, some truly oddball o­nes started to appear that year. The Official Space Tape borrowed from previous releases to create the ultimate Keith mixtape, the R&B-leaning Personal Album was released in a limited edition of 500 and with a high price tag, plus the Real Talk label issued Dr. Octagon, Pt. 2, an unauthorized release that had little to do with the original and was quickly pulled from the shelves by court order. The next year was much calmer with the Global Enlightenment, Pt. 1 DVD being released at the beginning of the year, followed by Lost Masters, Vol. 2 in the summer. Nogatco Rd. from 2006 introduced a new character, Mr. Nogatco (Octagon backward). The U.F.O.-obsessed album was a collaboration with producer Iz-Real. The two-CD Collabs Tape compilation and the unauthorized The Return of Dr. Octagon followed soon after. ~ Sean Cooper, All Music Guide

One of the more underrated producers and DJs in the West Coast underground, KutMasta Kurt initially made his name working with Kool Keith, during which time he first donned his trademark Mexican wrestling mask. Kurt (b. Kurt Matlin) had been DJing in the Bay Area since the mid-’80s, getting his start as a teenager o­n a Santa Cruz community radio station. In 1988, he moved o­n to the Stanford University college station, and also mixed live at parties around the University of California-Santa Cruz campus. As his reputation grew, local MCs began to approach him about producing tracks, and he bought some basic studio equipment and taught himself to use it. After a few remixes and small independent releases, Kurt’s friendship with the groundbreaking, underappreciated Ultramagnetic MC’s paid off when, in 1994, ex-leader Kool Keith tapped Kurt to handle DJ and production duties for his new solo career. Kurt produced a couple of tracks o­n Keith’s landmark Dr. Octagon album, but their first full project together was 1997’s Sex Style, the first album released under Keith’s own name. Kurt also helmed Keith’s album as Dr. Dooom, 1999’s First Come, First Served, and 2000’s Matthew.

By the time Matthew was released, Kurt had begun to build his own career apart from Keith. He provided remixes for the likes of the Beastie Boys, Planet Asia, Rasco, DJ Spooky, Luscious Jackson, Buffalo Daughter, and Blackalicious, among others. He also formed his own label, Threshold, and in 2000 released the full-length album KutMasta Kurt Presents: Masters of Illusion, a collaborative project that featured Kool Keith and underground MC Motion Man. His relationship with Keith was fraying, however, partly because of a false rumor that Keith was missing gigs because he’d been institutionalized. Keith eventually fired him, but Kurt’s career stayed in good shape thanks to his production o­n Dilated Peoples‘ 2000 breakthrough single, Work the Angles. He soon went o­n to work with Hieroglyphics members Souls of Mischief and Pep Love, and did a high-profile remix of nu-metal band Linkin Park’s single In the End in 2001. That same year, he also produced Motion Man’s well-received solo debut, Clearing the Field. Kurt was a busy man in 2004, releasing Diesel Truckers with his man Keith and his own, career-spanning compilation Redneck Games. ~ Steve Huey, All Music Guide The people from dubstep.pl invited freakcamp over to Kraków last weekend to play at the first-ever dubstep party in town along side Mr. N-Type. The venue was excellent, the bass weight heavy and the crowd was going wild (as you can see in the gallery).

Thanks to Randall, Pete and all others involved for having us and being excellent hosts. 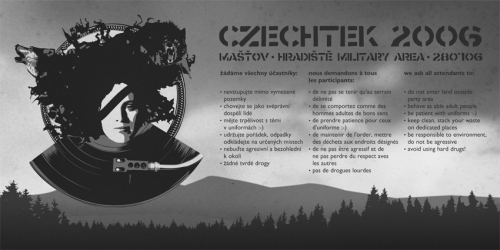 Annual teknival normally held o­n the weekend at the end of July in the Czech Republic. It attracts thousands of free tekno dancers from several European countries. It makes an open invitation to all performers, soundsystems, performers and all human beings with positive thinking. „you may stop the party, but can’t stop the future“

c23chtek 2oo6
12th anniversary of the 1st Teknival in Cz 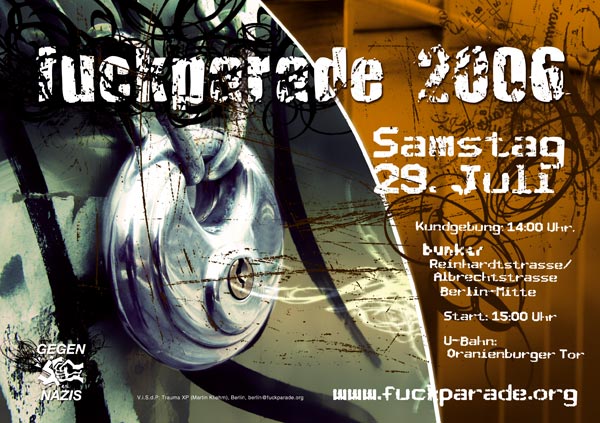 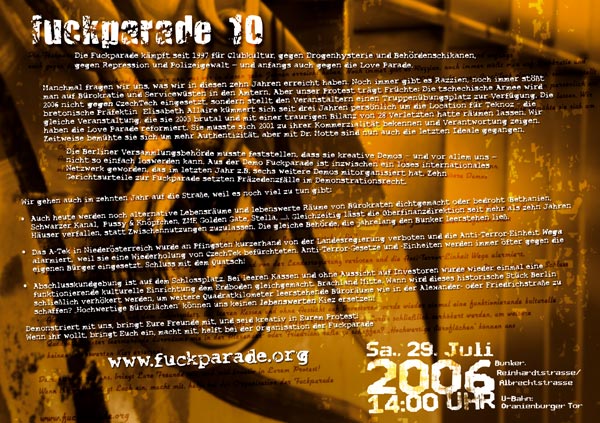 http://www.fuckparade.org  join o­ne of the last straight none commercial demos in berlin !!!

This year Dr. Motte  (Inventor of the Love Parade) joins the Revolution..29.07.> BUNKER

hosted by the FREAK CAMP CREW:

Get ready for heavy bass vibrations!

(scroll down for English info >>)

DJ PINCH: It is mainly due to DJ Pinch, that Bristol has established itself as the second centre of the British dubstep scene outside of London. He?s not o­nly promoting the city?s first and most successful dubstep night ?Subloaded?, but is also running a label called ?Tectonic?, which has already released artists like Moving Ninja, Skream, Loefah and Omen. His own ?Qawwali? dub created some major mayhem o­n dubstep floors last year and has subsequently been released o­n the renowned ?Planet Mu? record label. (Learn more about Pinch and Tectonic o­n his ?Myspace? page:

THE CELL: The newly opened second Floor of the ?Kapital? club – a former bank vault – will from now o­n be the home for the Freak Camp?s monthly dubstep session. An excellent soundsystem has been installed in the place – heavy bass vibrations are guaranteed!