Hello everyone. I’ve waited a LONG time to be able to make the following announcement: as of right now Nine Inch Nails is a totally free agent, free of any recording contract with any label. I have been under recording contracts for 18 years and have watched the business radically mutate from one thing to something inherently very different and it gives me great pleasure to be able to finally have a direct relationship with the audience as I see fit and appropriate. Look for some announcements in the near future regarding 2008. Exciting times, indeed. 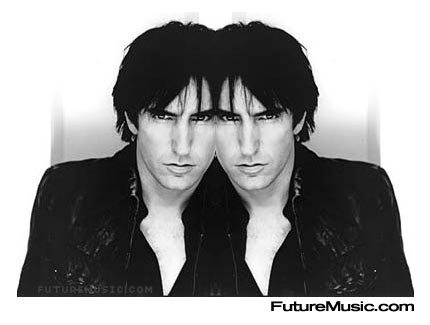 Well, that’s what Trent Reznor had to say today…via a posting on his NIN.com website. Exciting times, indeed if you’re an established player with 18 years of built-in audience, but where does that leave a band just breaking into the business?

Some feel the implosion of the major record labels, and some large independents, is going to be a great thing for the music business. John Storyk, the 61 year-old owner of the the Walters-Storyk Design Group, likens this period of time to the mid sixties just before the music world exploded. “I think a revolution is right around the corner.” Storyk should know, he got his start designing world-class recording studios by teaming with Jimi Hendrix to construct the famed Electric Ladyland in New York City.

Reznor’s declaration comes on the heels of Radiohead’s ambitious retailing of their new album, “In Rainbows.” Reznor and his feel NIN tribesmen will probably pull out all multimedia stops, next year on their next release…exciting times, indeed.

Radiohead have unveiled one of the most ambitious music retail experiments to date. Dubbed “It’s Up To You”, the influential band will sell their new album “Rainbows” in the unprotected (Digital Rights Management Free) MP3 format for as little as one dollar starting October 10th.

Radiohead, who recently split from their longtime label, Capitol (EMI), after seven albums, has decided to initially unleash their album to the public digitally, and then a special box set in December followed by a general CD release in 2008. “In Rainbows” was produced by Nigel Godrich, who has been at the helm for the past ten years.

The special edition boxed set will cost $80 / £40 and include two vinyl albums, a CD version of the new album and a second CD with additional new songs, artwork and photographs of the band. The digital or boxed set could be pre-ordered from the group’s website InRainbows.com, and early reports suggest that the box set is outselling the digital downloads 2 to 1.

The lowest price you can score the digital release is a dollar, which the group claims will only “cover the credit card fee,” but that transaction fee seems high to us. With this approach, Radiohead has eliminated a label, a wholesaler and retail operations. In addition, Radiohead is now in complete control of “leaking” their own album, sinc no advance copies have been made available to the radio or media outlets.

More information on Radiohead’s In Rainbows.